==Back-Story==
(this is just a tentative submission of ideas. pixies live for hundreds of years so idk exactly how I met the party)
Swindlestick was born in a pixie village hidden amongst the lush growth that hung over the edge of the island of Sylvia. The village was secluded and almost completely inaccessible to walking folk, as many of the village pathways were mere inches wide, overlooking a deadly plummet for those clumsy enough to venture off the beaten path too far. Swindlestick was a unique pixie, however, which singled him out for seclusion among his society. Unlike most pixies, which resemble eladrin in respect to their facial features and eyes, Swindlestick had black skin like that of a drow. In addition, Swindlestick’s wings were a dark raven purple, which differed greatly from the vibrant colorful wings pixies were known for having. To make matters worse for Swindlestick, he was considered rather short, even among pixies, reaching only 6” tall on his tippy-toes.

Keeping in mind that pixies do not have parents, but are instead incarnations of nature & fey magic, it is easy to see why Swindlestick was shunned by pixie society. Forced out of town through ridicule, Swindlestick developed a bitter hatred for pixie society. He lived in a gloomy shack at the edge of town and was considered a joke among young pixie children, who would pretend his house was haunted and would ring his doorbell as a sign of courage. The adults of the village theorized that Swindlestick was an incarnation of the great pixie devil, whose soul was tainted by evil. They viewed his presence as a bad omen, and made every effort to ignore his existence.

One day, as Swindlestick was out scavenging for the ingredients to his favorite cricket-eye stew, someone from the village burned down Swindlestick’s home. “This is the last straw,” grumbled Swindlestick, “I’m going to get revenge on those bastards if it’s the last thing I do.” It was at this point that Swindlestick swore a life of evil and revenge on all of society for mistreating him. “Maybe they’re right,” he said, “maybe I am evil. So be it. I don’t care. I’ll make them pay. I’ll make them all pay. Then they’ll all have to respect me! Hahahahaaaa!”

It was that night that Swindlestick began to plot. He gathered the only friends he had: a smattering of different insects, some mice, and a snail, and formulated a plan so diabolical that his name would be forever remembered in infamy. He snuck into the grain reserves of the pixie village with the help of his friends, and carried off much of the food they had been saving in case of a food shortage, thus greatly inconveniencing them for the months ahead. Once he was far enough away from the town, Swindlestick reveled in the glory of his accomplishment in front of the clueless audience of his forest critter chums. “Bahahahaaaa… I’ve done it! I’ve ruined them! My plan worked so perfectly… and now to bring terror to the rest of the world!” And so Swindlestick ventured onward, bringing minor inconvenience the world around him and traveling place to place, making a total dick of himself while earning enough food and coin to earn a living.

But perhaps Swindlestick is not really evil; maybe he is just an old pixie turned bitter by the society that shunned him. Even Swindlestick’s most evil ambitions are quite harmless, with his deceit bringing at most a moderate financial loss to his victims. Perhaps he is just a little pixie frustrated with a world that refuses to take a 6” tall man’s threats very seriously. 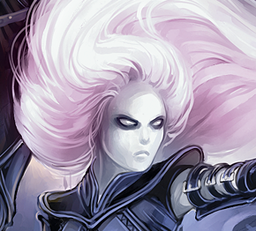