Best described as a blunt instrument used for hitting people.

After an unfortunate misunderstanding with the World Navy, Keothi and Decon Frostfeathers decided that they would be better off if they were to leave the island of Kauzza. They offered their services to (some pirate whos name I cannot think of), who, having seen the fighting prowess of Keothi and the wit of Decon, gladly accepted them into his group of fighters.

Whether it was cliff climbing, wrestling, or a good old game of stubborn root, Keothi never lost. So even you can imagine his surprise when he was bested in a game of cliff climb by a scrawny goliath named Lo-Kag. Not one to be shamed by defeat, Keothi challenged the much smaller Lo-Kag to a wrestling match.

As the match progressed, Keothi found that he was again losing to Lo-Kag. Lo-Kag was able to maneuver Keothi into a favorable position and put him into a submission hold. The longer Lo-Kag held Keothi in the hold, the more enraged Keothi became, until eventually he blacked out.

When Keothi came back to, he found himself standing over Lo-Kag’s lifeless body, his neck quite obviously broken. As he looked around, Keothi noticed all of the other goliaths staring, astonished at the horror of what they had just witnessed.

When Meavoi, the chieftain of the tribe, heard what had transpired, he was both furious and heartbroken at the same time. How would you feel if you were just told that your oldest son had killed his youngest brother and your youngest son? Meavoi knew that he must exile Keothi or risk losing the tribe.

It was a long time before Keothi was able to transition from life in his tribe to life in the more modern world of Dierailsa. To help with his transition, Keothi decided to join the World Navy because they offered free food and a chance to learn. It was painfully obvious to his instructors in the academy that Keothi was far too primitive and unintelligent to ever make it far in the Navy. After failing several classes, Keothi was discharged from the Navy for his inability to follow orders, though it was not for his lack of trying, he simply was not able to comprehend them most of the time.

After being discharged from the Navy, Keothi found himself in a state of depression that could only be cured by drinking. He made a name for himself by going to different inns and putting on shows of his almost superhumanoid strength in exchange for drink and a place to sleep.

It was while Keothi was putting on a display of his strength that he was noticed by a Kenku who happened to be in town with the Billing Brothers Traveling Circus . Decon Frostfeathers, the Kenku, saw potential in Keothi and recruited him to join the circus, as they had recently lost their strong man in an unfortunate accident with one of the circus’ trained Behirs. At first, Keothi truly enjoyed working for the circus because he was able to show off his physical prowess almost every night. The ringmaster even let him, literally, throw people out of the tent when they were being too rowdy, which made the crowds cheer even louder. It was at the circus that Keothi found himself and was able to get passed his depression.

After some time had passed, Keothi began to get bored with the circus. When thinking about it one day, he decided that he might be able to take his life in a new direction. He wanted to do something that really mattered, but he wasn’t sure how to get there. As luck would have it, Keothi would get his chance later that night.

The circus was about to wrap up its final show on the island of Kauzza when a group of gang members came into the tent.

“This is a robbery! Everyone stay calm and do exactly as I say, and I won’t have to use THIS!” The leader of the gang exclaimed as he uncovered a large vat of alchemist fire (A gnomish invention that is similar to napalm today. It is designed to stick to whatever it touches and burn for hours, it is also extremely combustible.).

Thinking quickly, the bard Satire Verisimilitude, who happened to be sitting in the first row with his groupies, engaged the gang leader in an enthralling conversation about the weather. While he was distracted, Decon and Keothi took advantage and managed to take out the rest of the gang without them setting off the alchemist fire. With the rest of the gang disposed of, (the Bard) convinced the gang leader to turn himself in at the nearest jail.

Also present at the circus that night, was Poseidon Tassadar, a professor at the Naval Academy and former teacher to Keothi. After the circus closed up for the night, the professor approached Keothi with an offer of employment. It would seem that in addition to teaching at the Academy, the Professor ran a side business that dealt with the trade of items that were not exactly legal to possess, but which he often used to help the common people of Deirailsa, and he needed someone he could trust to work security.

Because Professor Poseidon had always been kinder to him than most of the other people at the Naval Academy and because it seemed to him that this would be his chance to make a difference in the world, Keothi decided to accept the Professors offer. 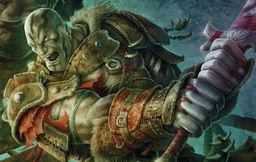