Audie comes from quite simple stock, one of the uncivilized races. After the Cataclysm, Shifters were left on the island of Mykonos where individuals families scurried to get territory. From these original families, tribes and then clans evolved. For years, the clans warred with one another for the few farmlands on the primarily rocky, precipitous land. Though the clans possessing power are always changing, about four families are in control of the island at any point in time; the other families find positions working for those in power as quickly as possible so as not to face possible extermination. The Ramsay clan has not been in a great position of power for more than a hundred years and instead typically assist the Lasaham family of the southern region. Audie’s mother Avis worked in the kitchen of the Lasaham house. Sexual relationships with the staff where not frowned upon and it has never been a shock when one of the kitchen girls became pregnant. It is very probably that Audie’s father is one of the Lasaham clan members, perhaps even a higher up, but there is no way to be sure. Audie spent the first five or so years of her life helping and playing in the kitchens. There, she learned important things such as basic sewing, the best ways to carry water to and from the well and how to de-bone fish.

When Audie was about the age of eight the world of Mykonos was flipped upside down. Pirates came to the island and, with the use of their superior sciences, subjugated the natives. Though there were attempts to overthrow the pirates their technology proved too much for the natives. Thankfully, after several years of this torture, the World Navy came and caused the pirates to abscond. Using their newly found freedom, the clans resumed their war with one difference: joining the navy was now a perfectly acceptable career choice. Audie was now about fifteen and absolutely fascinated by the [[The World Navy/the World Navy]]. Instead of being a good girl and helping in the kitchen, she suddenly spent an awful lot of time outside, playing with tree branches, pretending to attack pirates. Every year, the recruiter would come to the island and when Audie was seventeen, without alerting her mother or anyone, she enlisted.

Life in the Navy was as exciting as Audie had ever imagined it would be. She was trained in blade play, gun play, and hitting people in the face play! Audie has been working for the last decade of her life on getting as many promotions as possible, worshiping the Navy, trying to recruit others. 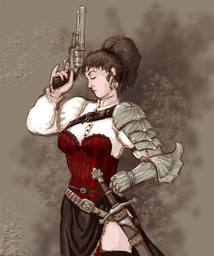